Who are these creatures sharing our city with us? This enigma is what lead Dr. John Wood to make this species the focus of his research.

Who are these creatures sharing our city with us? That question has taken Dr. John Wood and his students into the streets and parks of Edmonton many a wintry night. Their quest: the white-tailed jackrabbit.

The lean, spring-legged creatures abound in Edmonton, yet most of us know little about them. Twenty-four years ago, when Dr. Wood chose this species as the focus of his research, even he confused them with the smaller, woods-loving snowshoe hare.

Instead, white-tailed jackrabbits (or Lepus townsendii) are grassland species that have migrated to urban centres as their prairie habitat shrinks. Adding to the potential for confusion, they are hares, not rabbits. Adults live in above-ground depressions or “forms” rather than in burrows, and the young (or leveret) are born eyes-open and fully furred. Who knew?

After nearly a quarter century of field research, Dr. Wood knows all that—and much more. His contributions to the paucity of literature on the urban hare include a chapter in the 2006 book Coyotes Still Sing in My Valley: Conserving Biodiversity in a Northern City. Another large mass of data regarding the species’ numbers and habits sits begging for time to be written up.

White-tailed jackrabbits (or Lepus townsendii) are grassland species that have migrated to urban centres as their prairie habitat shrinks.

Before joining the King’s biology and ENVS staff, Dr. Wood studied urban water insects in California and Washington, driven by a passion to know, and thus better steward, his creaturely neighbours. Moving north, he realized that doing aquatic research during the school term would take students onto thin ice. The hare loping past his window suggested a dryland alternative.

“In some ways, it doesn’t really matter what species you study,” he says. “Death reigns out there, and these are the ones that lived. Every one is a highly successful organism with a fascinating story.”

In 1992, Wood began taking senior ENVS students on hare-hunting missions, flashlights and notebooks in hand. “We had to learn to distinguish bag bunnies from real bunnies,” he says, recalling the plastic bags that nearly entered early population counts.

Even minus the bags, Edmonton’s white-tailed jackrabbit population has escalated in the decades since, growing from less than 500 to nearly 3,000 before settling at about 2,600. Urban gardens and greenspaces provide ample food in an environment largely free of predators, Dr. Wood notes. “They do breed like bunnies. So just lower the predation rate slightly and the population will grow.” In fact, the classic “prairie cycle,” in which populations of small mammals expand and then contract as predator numbers rise, no longer seems to apply. 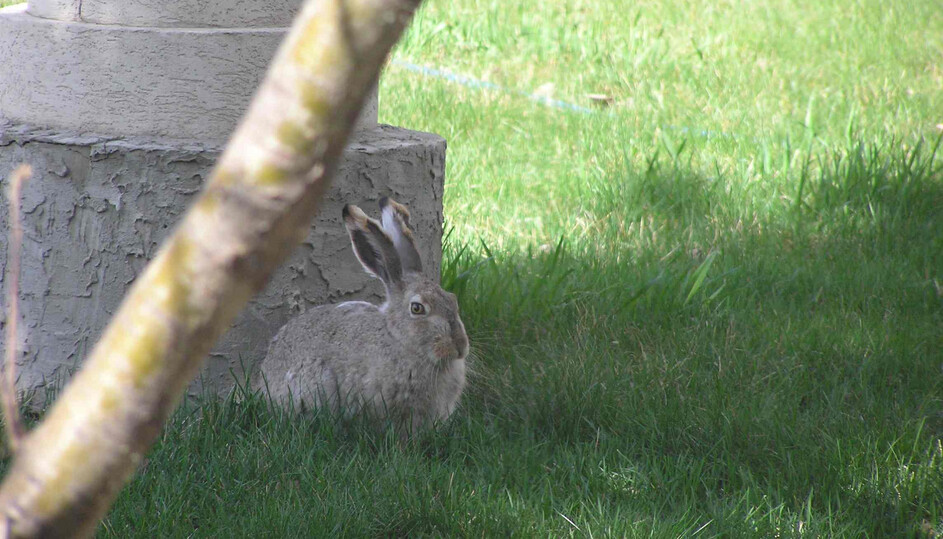 Traffic is the major hazard for the urban hare, who can sprint as fast as 70 km an hour. For the tiny leveret awaiting their mother’s brief appearances to nurse, birds post the greatest danger. Dr. Wood has filmed an adult jackrabbit in a lifeand-death chase to save her baby from a diving owl.

These hares are nocturnal, or as Wood puts it, “kind of like a teenager – up all night, asleep all day.” Through careful observation, the King’s hare-hunting crew has pieced together some defining habits. As dusk falls, the adults emerge from their forms, take a few steps, stretch and are off for the night. By the middle of the night, they’ve settled into a quiet time of eating and grooming. As sunrise nears, they may congregate before scattering to their own forms, where they sit out the day. “Our activities create space for them, and they habituate to our behaviour,” Dr. Wood says. “But they are not domesticated; they are still wild animals.”

Dr. Wood compares the joy of studying the white-tailed jackrabbit to being Bartholomew Cubbins with his 500 hats. “Every time you take one off, there’s another one. You never get to essence, you’re always discovering something new—and the closer you look, the more fascinating it is.”

This article first appeared in the Fall 2016 issue of Connection Magazine. Read more stories from this issue and other issues of Connection, here. For more on this subject, listen to Dr. John Wood's interview on CBC Radio.