Cities can become very hot places in the summer months. Buildings and vehicles emit a lot of heat which is then absorbed into roofs, sidewalks and roads. Concrete and asphalt trap the heat and can raise average summer temperatures into sweltering conditions. So a group of King’s Environmental Studies students took it upon themselves to map urban heat islands within Edmonton to see where the heat is most prevalent and to brainstorm solutions for what can be done about it.

A lack of green infrastructure, such as trees and parks, exacerbates the problem. This is called the heat island effect and explains why cities are typically far warmer than rural areas.

King's students Emmanuel Auta, Kristy Dupuis, Julia Gesshe and Jessica Young chose a warm day in June 2021 to use as their baseline for the project and noted up to a 20-degree difference in temperatures between the hottest and coldest parts of Edmonton. The culprit, more often than not, was a lack of vegetation and tree cover.

"Our project partner, an Edmonton based non-profit called Shrubscriber, inspired us to investigate the relationship between tree cover and temperature in Edmonton,” Gesshe says. "As temperatures vary significantly across the city and extreme high temperatures have negative impacts on both the environment and human health, we wanted to identify the Edmonton neighbourhoods that face the most extreme temperatures."

In order to put together a heat map for Edmonton, the team combined infrared satellite imagery from NASA and public tree data from the City of Edmonton’s open data catalogue. This is the first time Edmonton has had a heat map generated. The results gave them some ideas of what Edmonton needs to do next. 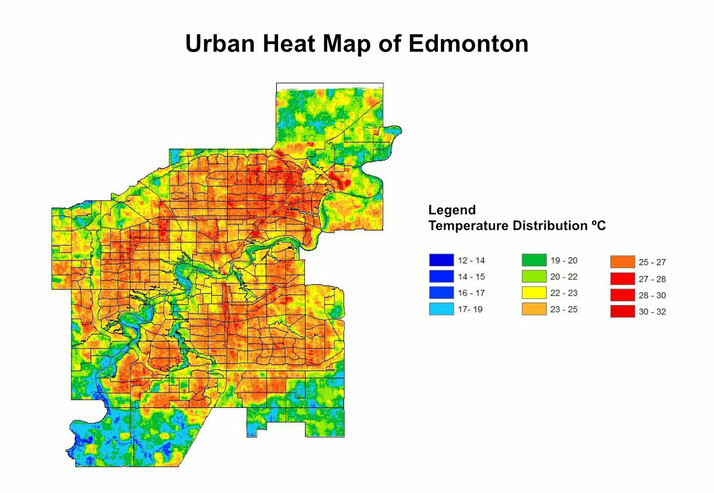 "Increasing tree cover in cities is one of the most promising strategies to combat urban heat islands, so we are excited to see how tree plantings could reduce temperatures in the neighbourhoods which experience the most extreme heat," Gesshe says.

The students are now eager to share their findings with the public and on January 26, will host an hour-long online conversation with Shrubscriber about Edmonton’s urban heat island and what can be done to  mitigate extreme temperatures at the community level.

“I am so pleased to provide students with opportunities like this in which they can do work that makes a difference in the world and contributes to building sustainability in our community. This group of students worked very hard and I am so proud of them!” says Dr. Joanne Moyer, Associate Professor and Director of Environmental Studies and Geography.


This project was made possible by King's Community Engaged Research initiative.

With twenty years of research, teaching, and scholarship at The King’s University, not to mention national and international recognition for her work as a highly sought after Ukrainian music expert,…