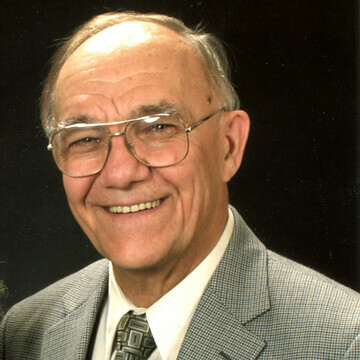 Jacobus Kloppers was born in South Africa 1937. After private studies in piano and organ he completed his undergraduate music studies and the B.Mus. Honns at the Potchefstroom University for Christian High Education (1961) and obtained his Performer and Teacher Licentiates in organ from the University of South Africa (UNISA). In 1959 he won the UNISA Overseas Scholarship in Organ Performance and continued his organ study with the Bach specialist/performer Professor Helmut Walcha at the Staatliche Hochschule für Musik in Frankfurt am Main (1961-1965), West Germany and received a PhD in Musicology from the Johann Wolfgang-Goethe University in Frankfurt, 1966, with a thesis on the interpretation of Bach’s organ music. The thesis, with five reprints, was distributed by Bärenreiter Antiquariat in Kassel.

He taught Organ and Musicology at the University of the Orange Free State in Bloemfontein, South Africa (1966-1976) and at The King’s University College (a private Christian college - now The King’s University – an institution in the tradition of the Free University, Amsterdam) in Edmonton, Alberta, Canada from 1979 until his retirement from institutional teaching in 2013. He is continuing with private organ lessonbs. In 1979 he was appointed at King’s to develop a Music Program, which he chaired until his retirement as tenured faculty member in 2008.He served as organist/choir director in Reformed Churches in South Africa (1956-1961, 1966-1976) and West Germany (1961-1966) and in St. John’s Anglican Church in Edmonton from 1976 to the present. Until 2000 he gave organ recitals and lectures in South Africa, North America, Germany and Austria and did organ broadcast work for the SABC and CBC.

As organ consultant he was involved in a number of organ projects in South Africa and Canada, including the Davis Concert Organ in the Winspear Centre for Performing Arts in Edmonton.

His ca. 85 compositions are mostly commissioned works and consist of organ chorale preludes (the majority), choral anthems and - concertati, a Te Deum for SATB with timpani and organ, an organ concerto, two saxophone concerti, two larger works for saxophone and organ, 2 organ duet suites, a concert piece for organ (Dialectic Fantasy), a concert piece Reflections for piano, a Piece Concertante for Organ, Piano and Timpani, an art song cycle Celebration of Faith for tenor and organ based on chorales, the Celtic Impressions  for organ solo, The Last Rose of Summer for organ and piano and the Jack and the Bean Stalk for narrator and organ. The latter 3 pieces, together with seven of his Christmas carol settings for organ have been orchestrated in 2020 (with retention of the organ part). His music is published in Canada, United States and South Africa, some of which appears on 18 compact discs (including the German Querstand and the Polish Dux label) or on You Tube. His music has enjoyed performances in greater Europe, North- and South America, Hong Kong and South Africa and broadcasts on CBC, SABC, Radio Netherlands, Polish Radio 2 and Minnesota Public Radio.  He is an Associate Composer of the Canadian Music Centre, member of the Canadian League of Composers, member of New Music Edmonton, an Honorary Fellow of the Royal Canadian College of Organists, Honorary Member of the South African Society of Church Organists (SAKOV) and was inducted into the Edmonton Cultural Hall of Fame in 2008.