With an exceptional base of alumni making a difference to choose from, settling on just three Alumni Achievement Award recipients each year is a challenge. It's a challenge King’s loves to undertake, however, as the university strives to share the stories of driven men and women making a difference in their communities and beyond.

Angela Santiago, CEO and co-founder of The Little Potato Company, is this year’s Distinguished Alumni award recipient. This award is given to alumni with a proven track record of academic achievement who have also made outstanding lifetime accomplishments.

Angela co-founded The Little Potato Company in 1996 with her father Jacob Vander Schaaf, a Dutch immigrant who longed for the tasty little potatoes of his youth. What began as a tiny operation on the outskirts of Edmonton selling at farmers’ markets, is now an international, multi-million dollar company employing more than 400 people; many of whom are newcomers to Canada.

Angela leads with a positive example, gives back to her community, and is a sought-after public speaker. Read more about Angela and The Little Potato Company.

Trixie Ling, founder and executive director of Flavours of Hope, is this year’s Servant Leader award recipient. The award honours alumni who have demonstrated extraordinary service to others, advocacy for the disadvantaged, and a commitment to volunteering.

Flavours of Hope is a social enterprise empowering refugee newcomer women to earn livable incomes and build social connections within their communities through cooking and sharing culinary traditions and stories. She was inspired to establish Flavours of Hope after her Vancouver church’s weekly neighbourhood dinners began to see an influx of newcomers to Canada attending their meals.

Trixie is driven by compassion and a desire to see justice and equity delivered within her community.

Nathan Flim, owner of The Fort Distillery, is this year’s Accomplished Young Alumni award recipient which is given to alumni 35 years old or under who have outstanding professional achievements and make significant community contributions.

Nathan’s passion for agriculture and chemistry led him to open a distillery alongside his wife Kayla in 2018. Their business produces delicious, small batch spirits, made using quality local ingredients. The Fort Distillery supports local farmers, hires community members, and showcases the talents of local artists. Over the last couple of years, The Fort Distillery has quickly become an important community space where people come to connect. Products of The Fort Distillery are now being sold and distributed across Canada and the US. 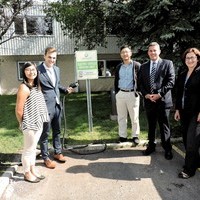 We're pleased to announce the installation of an electric vehicle charging station on The King's University campus thanks to the fundraising efforts of our students. The new charging station is free… 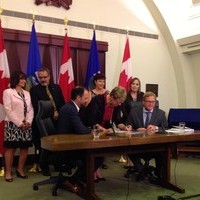 A Joint Commitment to Action 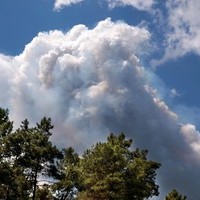 The six Edmonton-area Campus Alberta post-secondary institutions, King's, Concordia, MacEwan, NAIT, NorQuest, and U of A are committed fully to supporting applicants who may have difficulty completing… 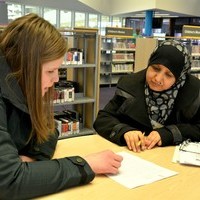 Students and faculty of The King’s University were privileged to work with ESL (English as a Second Language) students on a very special type of book project recently. King’s students Rynnelle Wiebe,… 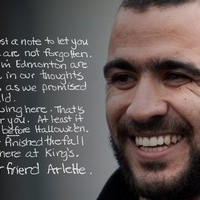 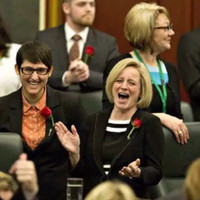 Continuing to Build Relationships in Government

When the Government of Alberta tabled its throne speech on March 8th, King’s President Dr. Melanie Humphreys was on the floor of the legislative chamber to hear it read by Lieutenant Governor Lois Mitchell.… 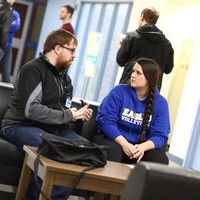 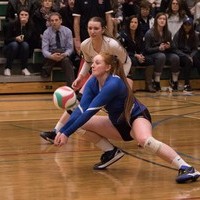 This Tuesday, The King’s University Eagles Women’s Volleyball team will travel to Charlottetown PEI to represent Edmonton and the Alberta Colleges Athletic Association (ACAC) at the Canadian Collegiate… 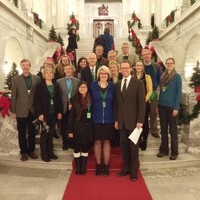 In collaboration with the City of Edmonton, the Leder School of Business at The King’s University, revealed that the challenge of its first High School Competition is “End Poverty Edmonton”. Leder…

Thank you, Commissioner Chief Littlechild, for being here this morning to help us dedicate this bench of reconciliation.  Thanks for your words, which are inspiring and which challenge us to accept the…

Seeking the peace & prosperity of our city

It is tradition at King’s for the President to speak at the first chapel of the new academic year.  I chose to speak on a passage of scripture that is familiar to many. Jeremiah 29:11 made the top…

Popular King's course, Literature and Film, open to the public this fall

Have you ever wondered why you prefer a novel to its film version?  Have you wondered why a film adaptation can be so different from the original book?  This fall, The King’s University Department… 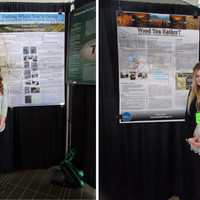 Congratulations to Kathryn Binnema and Kara Letain, 2nd year students in Environmental Studies (ENVS), were runners up in the undergraduate poster competition at a conference of the Canadian Association… 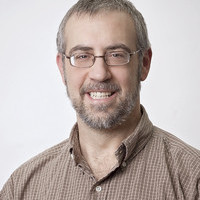 The King's University Associate Professor of Sociology Dr. Randolph Haluza-Delay will head to Oxford, England to participate in the Bridging the Two Cultures of Science and the Humanities project through…

Living into our mission

It has been an eventful week. I certainly didn’t expect to be speaking about Christian mission and higher education on the CBC radio program, As It Happens. I did expect, and receive, some criticism… 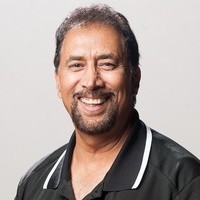 Naeem Haque Honoured as ACAC Badminton Coach of the Year

The King's University's Badminton Coach, Naeem Haque, has been named the 2015 ACAC Badminton Coach of the Year by the The Alberta Colleges Athletic Conference (ACAC).  This award was presented to Haque…