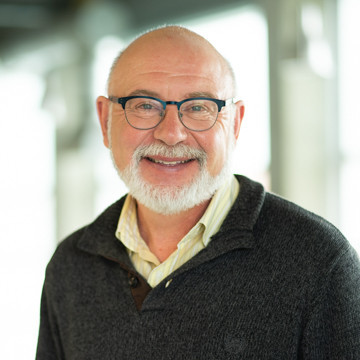 Daniel has been teaching at The King's University--and leading the development of the Visual Art, Drama, and Communication Arts programs--since 1993. Trained at Dordt College and The University of Alberta as designer for live theatre, he has designed hundreds of professional, educational, and community shows. Notably, he designed The Canadian Badlands Passion Play in Drumheller, Alberta from its inaugural season in 1994 until 2007.

While resident designer at Edmonton's Theatre Network, he was awarded a Sterling for Outstanding Set Design, and has recently been twice nominated for that award. He is a Past President of Theatre Alberta.

His research interests are the designer's role in the development of new plays and the application of Christian theological insight to the interpretation and appreciation of visual and performing art. His paintings have been featured in several solo exhibitions and are held in many private collections.

The Wizard Who Was...or Was Not, Kompany Family Theatre, production designer June 2011

At the End of Her Rope by Cheryl Jack, Persephone Theatre Saskatoon, set and costume designer March 2008