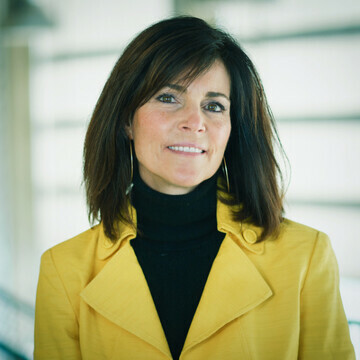 Arlette Zinck joined The King’s University community in 1998 and served as the first Dean of the Faculty of Arts from 2008 to 2011. She resumed the post in 2015 and retired from the role in July 2019. She was promoted to Full Professor in 2018. Her research interests centre around the literature of dissent in England and, particularly, the writer John Bunyan whose major works were written while incarcerated.

Zinck is first and foremost a teacher. Her passion for the classroom carries over to her volunteer work where she and her colleagues developed a post-secondary teaching program called The Ephesus Project for a small group of Correctional Services of Canada incarcerated learners. Her work with prisoners was recognized in 2012 with a Queen Elizabeth Diamond Jubilee Medal. In 2018, Zinck's excellence in teaching was recognized when she was awarded a 3M National Teaching Fellowship.

“The Engaged University and the Responsibility of its Educators.” McMaster Seminar Series on Higher Education: Practice, Policy, and Public Life. McMaster University. March 31, 2016.

"Reverend James Evans & the HBC: How a Cree Translation of Bunyan’s The Pilgrim’s Progress May Shed New Light on an Old Scandal." Annual Papers 2008. Society of Church Historians. May 2008

Brown, Sylvia and Arlette Zinck. “Bunyan Among Aboriginal Canadians: The Pilgrim’s Progress as Missionary Text to the Cree and Inuit Nations. In 1650-1850: Ideas, Aesthetics, and Inquiries in the Early Modern Era: Approaches to Bunyan. Ed. Ken Simpson. Vol. 13, 2006.

Sneep, John and Arlette Zinck. “Learning to Read Salvation: Psychological and Spiritual Change in Bunyan’s Grace Abounding and The Pilgrim’s Progress” in a special issue of Journal of Psychology and Christianity. Eds. Heather Looy, Kevin Seybold and Kevin Reimer, eds. 2006. Vol. 24. no2, pp. 156-164.