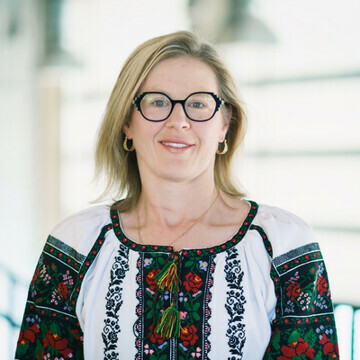 Melanie Turgeon began studying conducting at the age of 16, under the tutelage of Wolodymyr Kolesnyk, former conductor of Kyiv State Opera and Ballet Theatre. She completed her postsecondary education at the University of Alberta (BAMus and MMus), followed by the University of Illinois, graduating with a Doctor of the Musical Arts Degree in Choral Music. Dr. Turgeon is Professor of Music and Director of Choral Activities at The King’s University in Edmonton, Alberta, and Adjunct Professor at Cape Breton University in Sydney, Nova Scotia. She has conducted many choirs and ensembles and has presented research at several academic institutions and conferences both in Canada and internationally. Melanie has also toured extensively with her choirs, including three successful European tours. Being of Ukrainian descent, she has devoted herself to researching and promoting Ukrainian music, primarily sacred music. From 2002-2018, she served as Music Director and Cantor at St. Josaphat Ukrainian Catholic Cathedral in Edmonton. She is a member of the Eparchial Liturgical Commission, a role that results in organizing workshops and creating publications to educate and assist cantors in the Ukrainian Catholic Church. She hopes to  formally establish a Certificate of Eastern Christian Worship Program at The King’s University in the near future.

Highlights in Dr. Turgeon’s research endeavors include the publication of a book entitled, Composing the Sacred in Soviet and Post-Soviet Russia (2008), and the creation of the first bilingual hymnal for the Ukrainian Catholic Church, entitled Sing to our God (2008), which has been distributed worldwide. Melanie has released three recordings with Heruvymy Ukrainian Female Quartet, and one with King’s Choirs. In 2010 she founded Kappella Kyrie, an award-winning chamber choir primarily devoted to Slavic sacred music. Melanie has been heavily involved with the Ukrainian Art Song Project for more than a decade. She is honoured to be a faculty member and the co-director of this year’s Summer Institute in Toronto, Ontario.