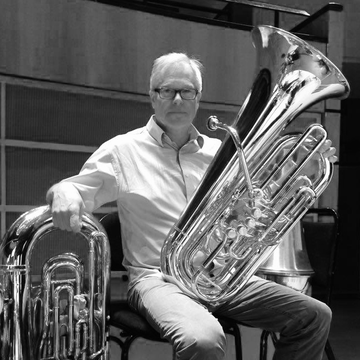 Scott Whetham is Principal Tuba with the Edmonton Symphony Orchestra and has appeared with the ESO as soloist in the concertos of John Williams and Ralph Vaughan Williams, and in solo works by Alec Wilder and jazz composer/arranger Jeff Tyzik.

Since moving to Alberta, Scott has taught hundreds of students, from private lessons to summer music camps to school workshops. Other teaching has included the Saskatchewan Summer School of the Arts, the Banff International Festival of Youth Orchestras, Guest Lecturer – The University of Saskatoon; Mount Royal College – Calgary, and a long association with MusiCamrose (now Musicamp Alberta). Academic positions have included the University of Alberta – Department of Music, and the University of Regina – Dept. of Music. He is currently on the Faculty at King's University.

In the 1980s, Scott formed the ‘Tubas of Edmonton’, a longstanding tuba/euphonium ensemble of amateur players who perform annually in the Winspear foyer. In 1995, he founded the Mill Creek Colliery Band – a 25-piece British style brass band. In recent years, he has been attending sessions at the Brass Band Summer School in the U.K.

Scott is an Associate Composer at the Canadian Music Centre (CMC) and has been featured in broadcasts on the CBC as performer and composer.

Scott began playing tuba in the North Vancouver Youth Band, under the direction of Arthur Smith. He studied formally with Dennis Miller (Vancouver Symphony). Lessons with Arnold Jacobs, Roger Bobo, Richard Erb (trombone) and Christopher Leuba (horn) were additionally inspiring. Further training included the National Youth Orchestra of Canada, and studies at the Eastman School of Music. Away from the ESO, Scott performs with the Tarragon Tea Orchestra (a European-style salon orchestra) and Bass Line Road (a modern music ensemble).