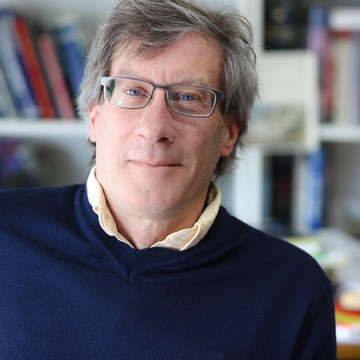 Richard Vaudry was born and grew up in the Eastern Townships of Quebec, attending Bishop’s University as an undergraduate. He possesses an M.A. in Scottish history from the University of Guelph and a Ph.D. in Canadian and British history from McGill University. Since moving to Alberta in 1985, he has taught at many universities and colleges in the Edmonton region including Augustana, Taylor, MacEwan and the University of Alberta. Since 2001, Vaudry has taught full-time at King’s. In 2003, he was elected as a Fellow of the Royal Historical Society (London, England).

His principal teaching areas are British and Canadian history. Dr. Vaudry has a special interest in the history of Christianity in Canada and transatlantic Evangelicalism. He has a keen interest in encouraging undergraduate historical research and has supervised a number of projects over the past decade on subjects as diverse as John Wesley’s views on health and medicine, and the Earl of Dartmouth’s evangelicalism and his influence on British public life. He also has an interest in global trade and commerce.

He is also a passionate supporter of the Manchester City Football Club.

Dr. Vaudry's main research interests can be defined broadly as examining aspects of the British Atlantic world, and the three books he has written revolve around this theme. His first, The Free Church in Victorian Canada, 1844-1861(Waterloo: Wilfrid Laurier University Press, 1989) was a study of the transplantation and establishment of the Free Church of Scotland to the United Province of the Canadas in the middle decades of the l9th century. His second, Anglicans and the Atlantic World: High Churchmen, Evangelicals and the Quebec Connection, (Montreal & Kingston: McGill-Queen’s University Press, 2003) focused on Anglican religious identity and controversy in 19th century Quebec. The third book, The Atlantic World of Andrew Fernando Holmes: Medicine, Science and Protestantism in 19th Century Montreal, is a biographical study of the first dean of the McGill University faculty of medicine. It is under contract with the University of Toronto Press. Research for this last book resulted in his developing a new course for King’s entitled “Medicine and Society in the Atlantic World 1660-1918.” Vaudry has also contributed articles to a number of academic journals including The Scottish Historical Review and Ontario History. Full-length articles have appeared in various books including Aspects of the Canadian Evangelical Experience, edited George Rawlyk, (Montreal & Kingston: McGill-Queen’s University Press, 1997; The Burning Bush and a Few Acres of Snow: The Presbyterian Contribution to Canadian Life and Cultre, edited William Klempa, (Ottawa: Carleton University Press, 1994); and French-Speaking Protestants in Canada: Historical Essays, edited Jason Zuidema, (Leiden and Boston:
Brill, 2011).